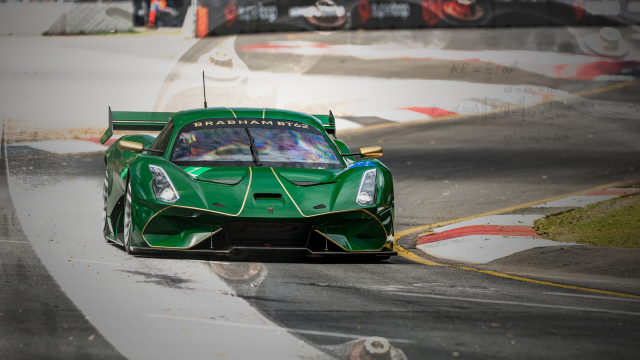 The objectives for the Brabham BT62 were very simple – design and build the most dynamic driver’s car in the world. It should come as no surprise, then, that the BT62’s brakes play a critical role in fulfilling that brief.

When you drive a BT62, you expect amazing acceleration from its 700 naturally aspirated horses. You expect amazing cornering thanks to 1600kg of downforce and a super-stiff dynamic chassis and suspension setup that can generate up to 3.5 G of lateral grip.

What you don’t expect is the face-pulling power of these all-carbon discs and pads with their six-piston calipers. 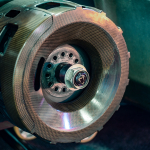 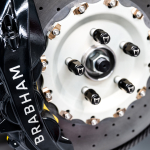 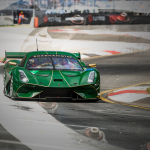 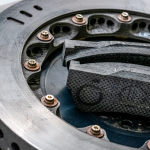 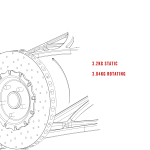 Counter-Intuition – Brakes, Braking and the BT62

The objectives for the Brabham BT62 were very simple – design and build the most dynamic driver’s car in the world.  It should come as no surprise, then, that the BT62’s brakes play a critical role in fulfilling that brief.

When you drive a BT62, you expect amazing acceleration from its 700 naturally aspirated horses.  You expect amazing cornering thanks to 1600kg of downforce and a super-stiff dynamic chassis and suspension setup that can generate up to 3.5 G of lateral grip.

What you don’t expect is the face-pulling power of these all-carbon discs and pads with their six-piston calipers.

“Anyone can drive flat out on a straight but one of the foundations of real speed is braking.  It is where so much time can be gained or lost.

As a driver you need to know you have a solid, reliable brake package with plenty of stopping power under your foot. If not, then watch the laps times climb dramatically.  When designing the Brabham BT62, we wanted to make sure the brake package was something you could rely on with complete confidence.

The BT62’s carbon-carbon brakes provide massive stopping power and importantly, they simply don’t fade.  They let you approach a corner with total confidence about getting in and away, as fast as possible.”

How much stopping power do these brakes have, you ask?

Just as the BT62 can generate up to 3.5 G in the corners, the same amount of G-force was recorded under brakes at the end of Conrod Straight, at Bathurst, when the BT62 set a record lap there in 2018.  For perspective, astronauts are typically subject to around 3G of force during take-off, albeit sustained for a longer period.

Our telemetry tells us that the BT62 can slow from 300km/h to a dead stop in just under 6 seconds.  That’s extraordinary when you consider that it’s without any adjustable aero acting as an air brake.  What it comes down to is incredible light weight, brilliant tyres from our partners at Goodyear and, of course, our outstanding carbon-carbon brakes.

Carbon-carbon brakes were first developed for the Concorde aircraft in the mid-1970s. Their potential for application in motorsport was immediately obvious, especially to Gordon Murray, who, at the time, was a young chief designer for the Brabham Formula 1 team.

The Brabham F1 team first tested carbon-carbon brakes in 1976 with the system making an unsuccessful debut later that season.  It would be another 4 years before they returned, 6 years until their first race win and 7 years until Nelson Piquet took the 1983 world championship for the Brabham F1 team in the BT52, the first championship to be won with carbon-carbon brakes.

Carbon-ceramic brakes were first offered on road-going supercars around the turn of the century and represent a significant step up from traditional iron brakes.  They have immense stopping power by comparison, rarely fade and are notably lighter.  They are the best brakes available for road use, which is why the new Brabham BT62R will be fitted with them as standard.

For Ultimate Track and Competition spec BT62s, however, only the ultimate in stopping power will do and carbon-carbon brakes raise these levels even higher.  They are lighter, have shorter stopping distances and consistent fade-free performance all day – some LMP1 cars have been known to race Le Mans with neither a disc OR pad change.

Like the rotors, the pads used for carbon-carbon braking systems are pure carbon.

Both carbon-ceramic and carbon-carbon offer outstanding stopping power but carbon-carbon can take greater heat loads – produced by greater friction – meaning more stopping power.  That they can do this while offering a significant weight advantage is invaluable when you’re looking for the ultimate in performance.

Weight – and what it means

As we covered in a recent article about mass, lowering vehicle weight is a virtuous circle that provides numerous benefits for dynamics and performance.

The savings from using carbon-carbon brakes are significant for the vehicle’s rotational mass as well as its unsprung weight – that proportion of vehicle mass that’s not being managed by your suspension system and is therefore harder to control.

A rotating part is heavier than the same part when at rest.  Anything you can do to lighten those parts means an exponential saving in weight in rotation, which represents an opportunity to minimize power losses and improve both responsiveness and handling.

The Brabham BT62’s carbon-carbon front brake disc is 380mm and weighs 3.2kg when static.  Our calculations tell us that the disc rises in weight to 3.84kg in rotation, a ratio of around 1.2:1.  What does this mean?  Every kilo we saved compared to other brakes of this size is equivalent to saving 1.2 kilos of static weight elsewhere when the car’s in motion.   In practical terms, that means we not only enjoy improved stopping power, we also get a 12% saving on equivalent mass compared to carbon-ceramic disc, and around 133% saved compared to a top-shelf, high-performance traditional iron disc.

The supreme light weight of carbon-carbon brakes offers the least rotational mass combined with the absolute best in braking power and reliability.  A true win-win.

Brakes and the Brabham BT62

The brakes on the Brabham BT62 Ultimate Track and Competition specification vehicles comprise a full carbon-carbon setup (rotors and pads) with 6-piston calipers and carbonfibre brake cans.  They are a key component in the cars’ outstanding, world’s-class vehicle dynamics.

We’ve discussed how one of the big advantages of carbon-based brakes is light weight.  But how light are they?

A carbon-carbon rotor of 355mm diameter such as that used on the rear of the Brabham BT62 weighs just 2.6kg.  The front rotor (380mm) weighs just 3.2kg.  That’s around 65% less than a cast iron performance rotor and around 30% less than the carbon-ceramic rotor.

This represents a massive weight saving at each corner of the car, reducing both unsprung weight and rotating mass, both of which contribute significantly to the BT62’s incredible vehicle dynamics.

The brake package is enhanced with an adjustable traction control system and motorsport ABS for the ultimate in precision control.  Both ABS and Traction Control can be switched on or off.  Both are also fully adjustable with 12 levels of assistance available via controls on the steering wheel.

Front/rear brake bias hardware ensures an optimum brake balance for every driving style, even when grip or weight balance shifts throughout a race due to tyre wear or fuel use.

Carbon-carbon brakes need temperatures of around 400 C degrees to work effectively, hence their orientation towards track use.  The Brabham BT62’s carbon fibre brake cans ensure that the brakes maintain at least the minimum desired level of heat to brake effectively at the end of a long straight.  Cooling channels around the cans direct air through the centre of the rotor and out through its 36 cooling vanes (front, 32 at rear) to ensure the brakes don’t get above the 850 C degree operating maximum.

What this package delivers is a braking system typically seen in the likes of Formula 1, LMP1, IndyCar or other upper echelons of professional racing.  It combines the ultimate in stopping power with the benefits of supreme light weight in a package that allows drivers the confidence to perform at their absolute best - corner after corner, lap after lap.

“If you could make a road car [brake] like this, you’d set the airbags off. Seeing how late you could leave landing on the brakes became a twice-a-lap odyssey for every lap I was out there.  At first I was awed, then entertained and finally just very curious to see exactly what was needed to distress those discs. I never found out.”

The Brabham BT62 is designed to be the most dynamic driver’s car in the world, encouraging drivers of all levels to expand their horizons and explore its extraordinary performance potential.

Using the most advanced braking system available today is just one example of how it fills that brief.